At the last Super Series tournament of the year, the Hong Kong Open, the ROK’s Lee Yong Dae／ Yoo Yeon Seong once again defeated top seeds Ahsan／Setiawan before beating compatriots Kim Ki Jung／Kim Sa Rang in a three-game final to take the Hong Kong Open title. This success came soon after their title win at the China Open, and was their third title since they became a doubles pair. 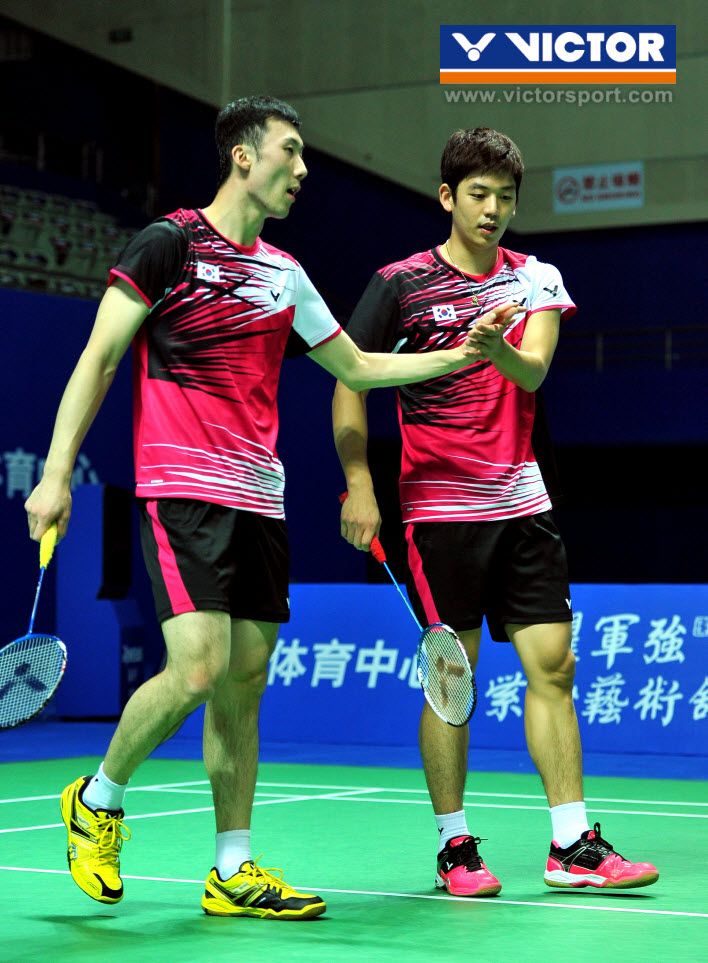 Lee Yong Dae／Yoo Yeon Seong
Lee／Yoo began playing together in October and showed how formidable a pairing they would be straight from the off when they defeated world champions  Ahsan ／Setiawan at the Denmark Open. The semi-final meeting between the two pairs at the Hong Kong Open was the third time they have gone head to head.
After losing on two previous outings against the ROK pair, in his meeting the Indonesians were more patient and doggedly kept close behind their opponents throughout, neither side giving ground. Thanks to their precision and consistency Lee／Yoo were able to emerge triumphant in the end, taking a hard-fought match in straight games 22-20, 22:20 to reach the final.
The other pair to reach the final were fourth seeds Kim Ki Jung／Kim Sa Rang. These two top ROK men’s doubles pairs are very familiar with the other’s playing style. Kim／Kim got off to a fine start and maintained a healthy lead throughout, taking the first game 21:12. However, Lee／Yoo were able to change their rhythm in the second game and took the game to level the score. In the deciding third game Lee／Yoo were unstoppable and led all the way, taking the third game and the match, and thus bagging their third title in five tournament outings!
In the mixed doubles final, husband and wife pair England’s Adcock／White beat China’s Liu Cheng／Bao Yi Xin to take their first title of the year. It is worth mentioning that in the quarter finals they beat another couple, Zhang Nan／Zhao Yun Lei. Zhang ／Zhao had beaten their opponents three times in the previous month but this time Adcock／White were on top form making many successful smashes and covering an amazing area of the court to take revenge against Zhang／Zhao, a victory not many people expected.
In the women’s doubles China’s newcomers Dong Ni／Tang Yuan Ting caused an upset by beating long-reigning badminton queens Yu Yang／Wang Xiao Li, however they fell at the last hurdle at the hands of the highly experienced Chinese pair Bao Yi Xin／Tang Jin Hua in the final. This new force in women’s doubles Bao／Tang only began playing together last month but have won all four of the tournaments they have played so far, three of which were Super Series ones.
In the women’s singles. China’s Wang Yi Han beat her teammate Wang Shi Xian to take the title. Malaysia’s badminton king Lee Chong Wei beat famous Indonesian player Sony in straight games to take his sixth title of the year. Lee has made the semifinal in every tournament he has played this year and, with a massive lead over the second placed player, has once again qualified for the end of year Super Series finals.