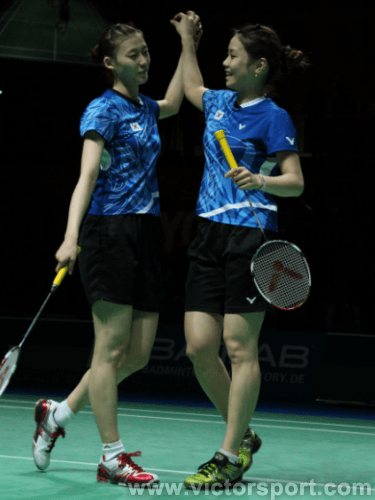 In the women’s doubles, Kim Ha Na/ Jung Kyung Eun, who are seeking to replace Kim Min Jung/ Ha Jung Eun as the number one women’s doubles pair in South Korea, were up against the new pairing of Ma Jin/ Tang Jin Hua of China. Before the match not many commentators or fans thought the Kim/ Jung would win.
In the first game Kim/ Jung had no answer to Ma’s nimble distribution and Tang’s attacks from the back of court, going down 11-21. After changing ends, Kim was reminded by her coach to be more aggressive in front of the net to win back control of play and she did just that. In the second and third games the Chinese attacking play was neutralized and Kim/ Jung took them 21-14 and 21-13 to take the match two games to one. This was their second international tournament win after taking the title at the Indian Open Super Series four years ago. 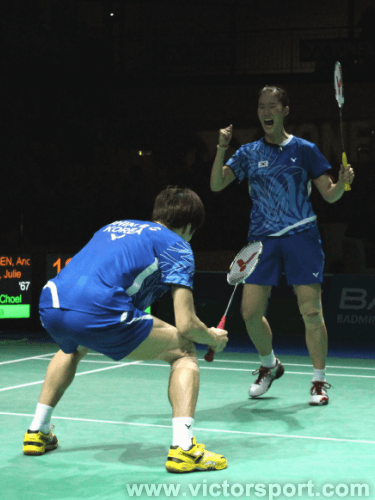 In the mixed doubles, the new pairing of Shin Baek Choel/ Jang Yi Na made it to the final on their first outing together. It can be said that their playing style is very strange. Shin is quick and defends over a wide area, covering almost the whole of his side of the court, while attacking at the net if an opportunity is presented, or making attacking chances for his partner. This arrangement is very different to the situation usually seen in mixed doubles, with the man being responsible for the back of the court. A Chinese Taipei coach said that Jang Yi Na isn’t so good and Shin actually covers about three quarters of one half of the court.
In the final their strange playing style put their opponents off balance and the Koreans were able to take the first game 21-19. After changing ends, the Danes exploited their opponents’ weak point, the fact that Shin had to defend too much of the court, and did their best to make him run all over the court; the tactic worked and they claimed game two.In the deciding game the Danes stayed slightly ahead throughout; however, the Korean’s were able to stay close behind and drew level as the game reached its denouement. At 20-all the referee made a ruling that went against Shin/ Jang but they were still able to stand the pressure and take the game 24-22 to win the match.
In other finals, China’s Chen Long overcame Indonesia’s Tommy Sugiarto with relative ease in the men’s doubles, winning 21-17, 21-11; in the women’s singles, despite being roared on by the home crowd, Germany’s Juliane Schenck was still kept in check by Wang Yi Han; unable to play to her normal standard she had to settle for second place at the German Open for the fourth year in a row. In the men’s doubles final, China’s Hong Wei/ Chai Biao beat their teammates Liu Xiao Long/ Qiu Zi Han.
The German Open Grand Prix Gold 2013 has come to a close. The All-England Open Super Series Premier will soon follow. For all the latest tournament information, keep a close eye on VICTOR’s official website at www.victorsport.com
( Edit by VICTOR Badminton )